A Guide to our City's Murals

The Lake Wales Community is proud of its art. Our murals are but one manifestation of our commitment.
The huge artworks gracing downtown buildings were coordinated by the Lake Wales Murals and Enhancement Board. The murals were funded primarily by citizens and visitors.

1. DOWNTOWN CITY MURAL
LOCATION: 254 East Stuart Avenue, Scenic Optical
Scenic Hwy (SR 17) and Stuart Avenue
SPONSORS: Mountain Lake Community Services and Main Street
ARTIST: Tom Freeman  SIZE:  81' X 24'   COMPLETED:  Mid 1990s
This city scene depicts downtown as it appeared in the late 20s and early 30s. The huge two-story building mural was designed and painted under the direction of Tom Freeman in the mid 1990s. Area students and local artists also contributed to this community asset. Material funding came primarily from Mountain Lake Community Services. Time and the elements took a toll on the work. In 2007 money was raised to restore the mural to its original grandeur. Lisa Moore was commissioned to do the restoration and added many of her own touches to the original work.
Below is a photograph of the same scene. 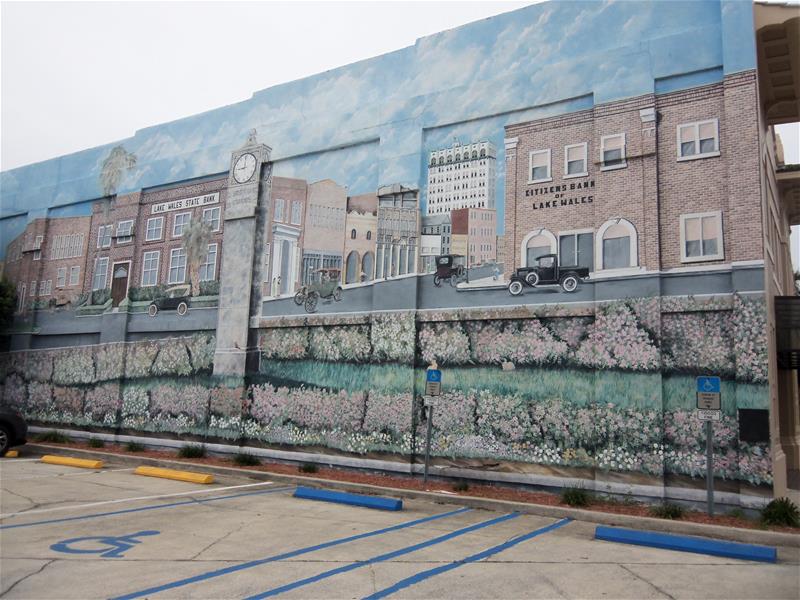 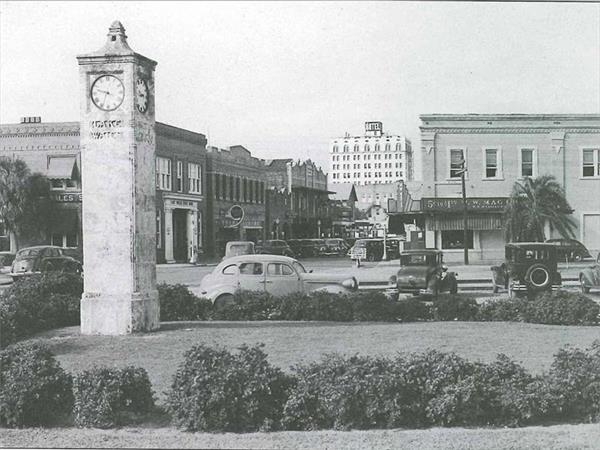 Friends and family of current Fletcher Electric owner, John Fletcher commissioned a mural depicting founder Virgil Fletcher "passing the torch" to his son. The mural was designed to be a surprise for john when he returned from a two-week hunting trip. Accomplished artist Lisa Moore was selected to do the work. Much pre-planning enabled Lisa to start on the job as John left town. A succession of 15-hour days resulted in the unveiling when John returned two weeks later. 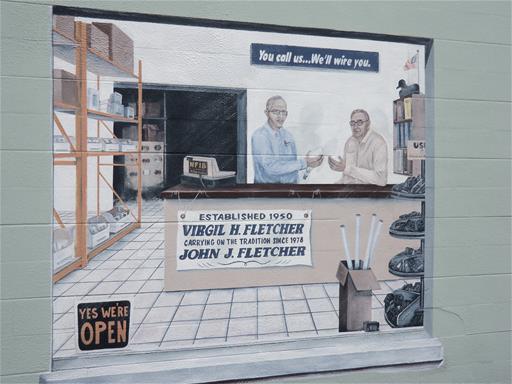 The Old Lake Wales City Hall was built in 1928 and served as the seat of City government until 1999. The building was deeded to Polk State College in 2007 to establish a Campus in Lake Wales. State Senator JD Alexander secured funding to restore the building to its original grandeur, enabling residents to take college-level classes closer to home. Tom Freeman was commissioned to paint the reception area's centerpiece mural. It was unveiled at the building's dedication in 2009. 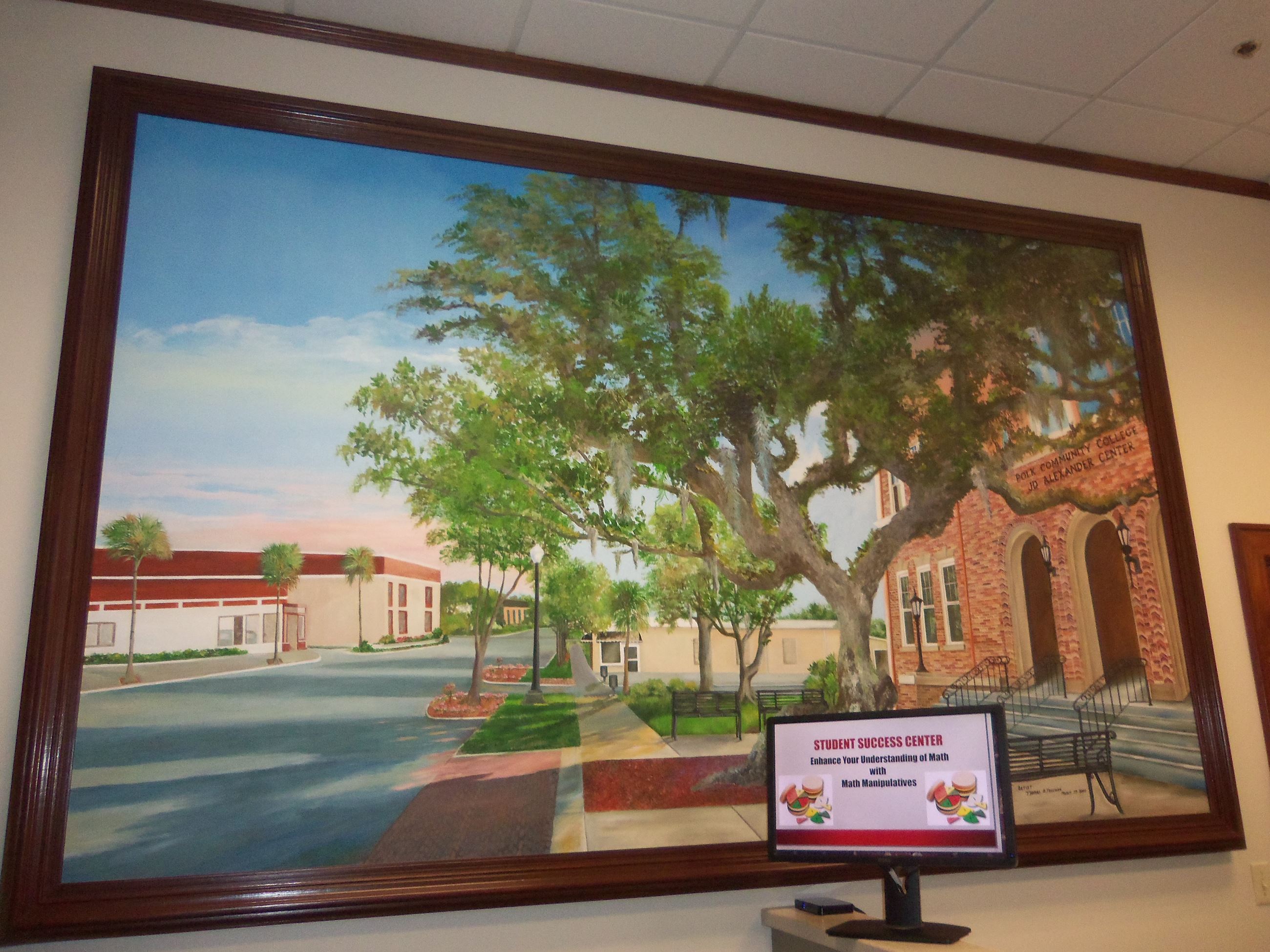 Completed in the mid 1990s, this mural represents our four founding Fathers overlaid on a map of the City of Lake Wales. The Historic Lake Wales Society was instrumental in the original funding of this work.

By 2005, serious problems had developed on the surface and the stucco was falling off. Artist Lisa Moore accepted the challenge of repairing the stucco and repainting the mural. This was completed in 2008 and again in 2015. This mural enhances the Central Avenue entrance to our historic downtown. Funding for the refurbishing came from local donations to the Mural Enhancement Program.

This mural was painted at the behest of many "old timers" who recall social activities and swimming on the western shore of Lake Wailes. The Pavilion was built by the Lake Wales Land Company and the City of Lake Wales assumed operation in 1917. The building fell victim to the ravages of time and termites and was demolished in 1974. The City Pavilion provided dressing rooms, concessions and a gathering place for community events. 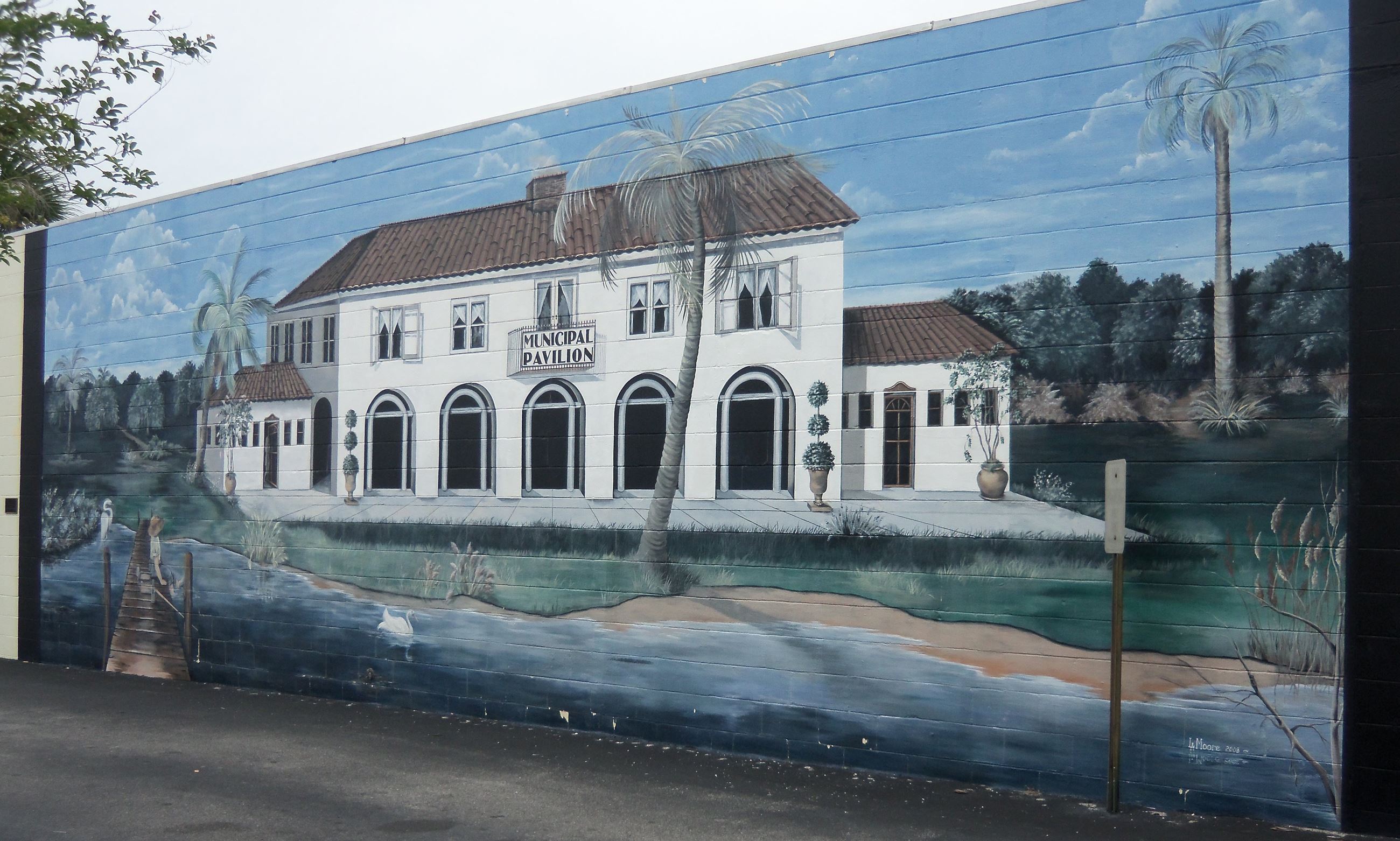 6. END OF A PERFECT DAY IN PARADISE
LOCATION:  229 E. Stuart Avenue, Salon Salon
SPONSORS:  Local Businesses and Citizens
ARTIST: James R. Hahn  SIZE: 77' x 18'  COMPLETED: 2007
This mural can be seen on the side of Salon Salon, across from the arcade on Stuart Avenue. Painted by artist James Hahn, this mural portrays the essence of our sub-tropical paradise in Central Florida. James and his wife Kay painted this masterpiece in two months and it was dedicated in the summer of 2007. Funding from local businesses and area citizens have dressed up a nondescript parking lot and added to the ambiance of the historic district. 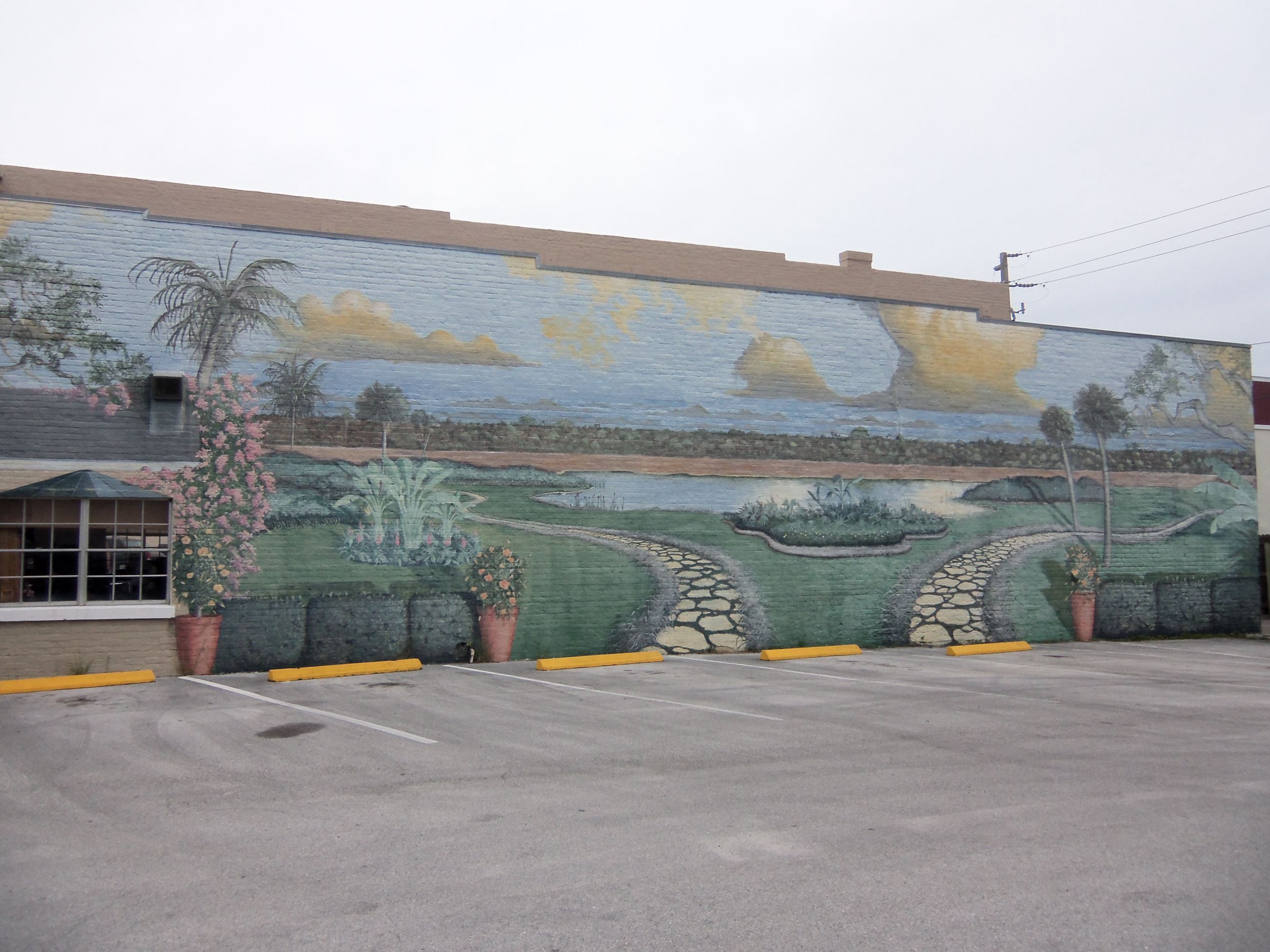 The turpentine industry was one of the original industries when Lake Wales was founded. The industry was at its zenith the first quarter of the 20th Century. Tom Freeman painted most of this two-story mural by himself in the mid 1990s. A portion of the funding was provided by the Historic Lake Wales Society. Lisa Moore refurbished the mural in 2007. 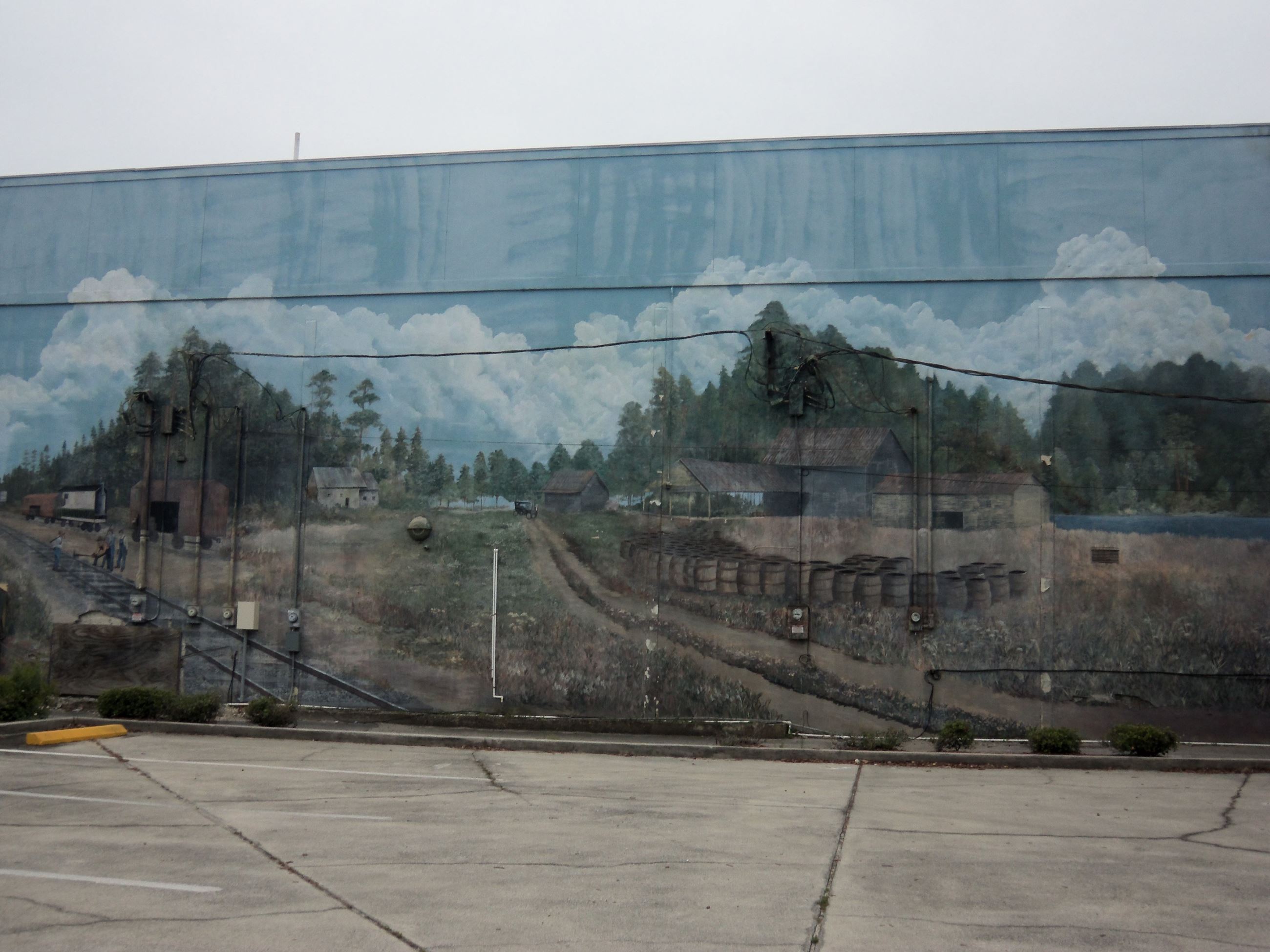 The Lake Wales Amphitheater was constructed in 1952. Every winter the Black Hills Passion Play from Spearfish South Dakota performed here. This was a huge tourism draw and many of our residents regularly volunteered to participate in the play and still have fond memories of this. The play closed in 1998. 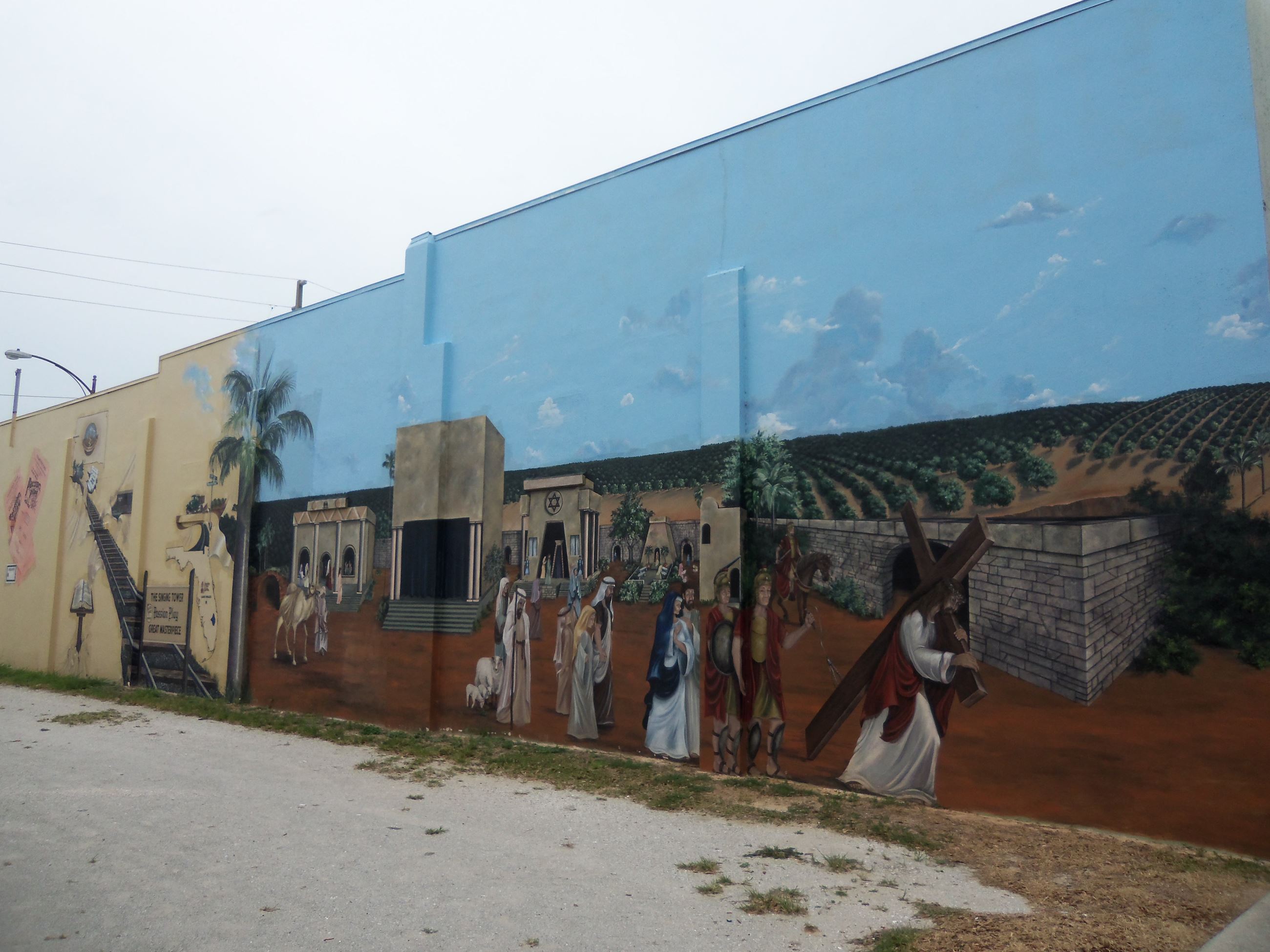 This printed mural is a composite of various historic photographs of Lake Wales. Images include Bok Tower, past school buildings, historic homes, railroading, citrus, Spook Hill among others. 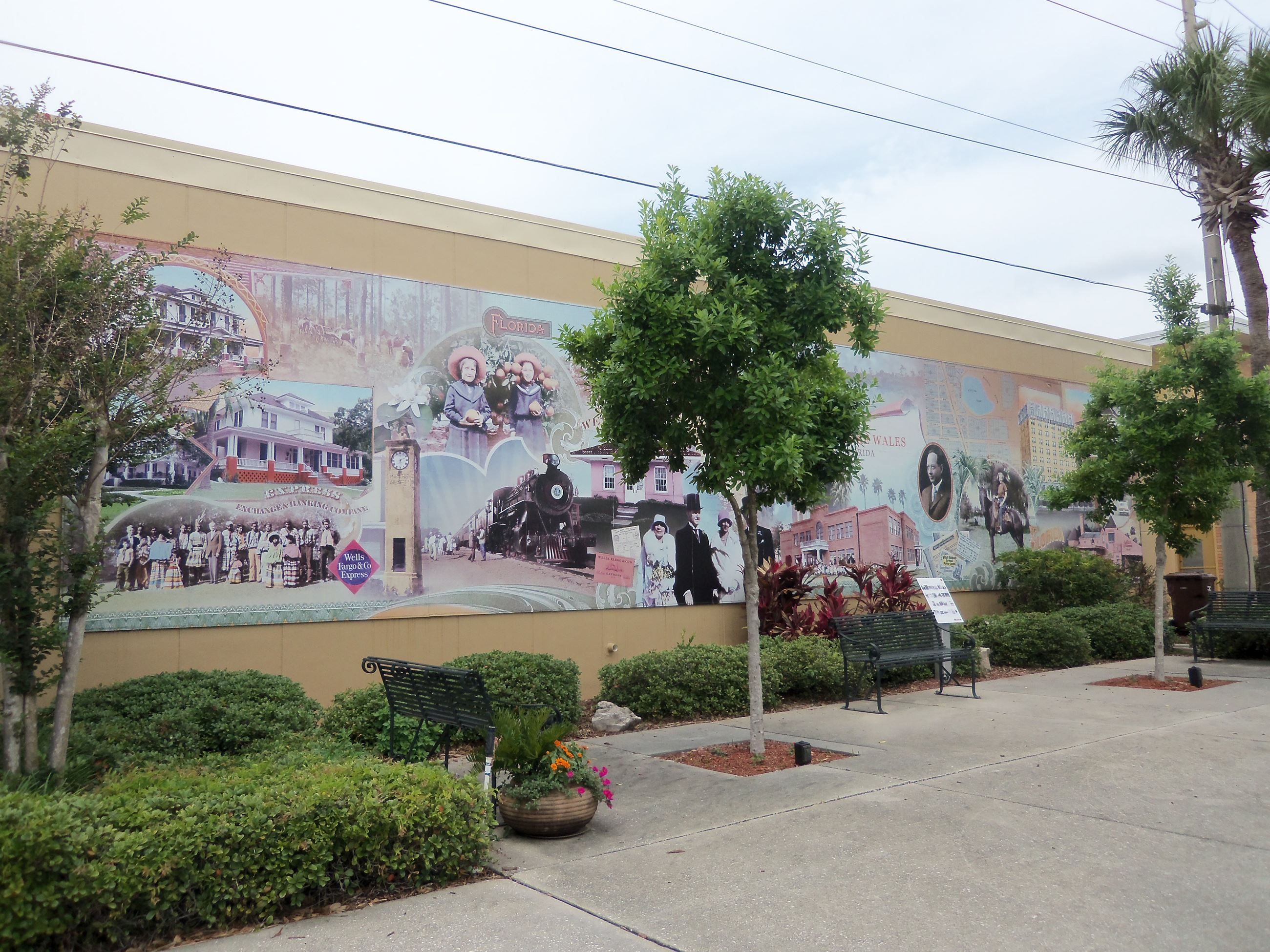 This mural reflects Lake Wailes Lake as it appeared in 1929 when Bok Tower Gardens was dedicated. Painted by lead artist Tom Freeman, with the assistance of his protege Diane Lescard, this mural was dedicated in the summer of 2005.

The parking lot was donated to the city by True Value Hardware after a destructive fire in the summer of 2005. 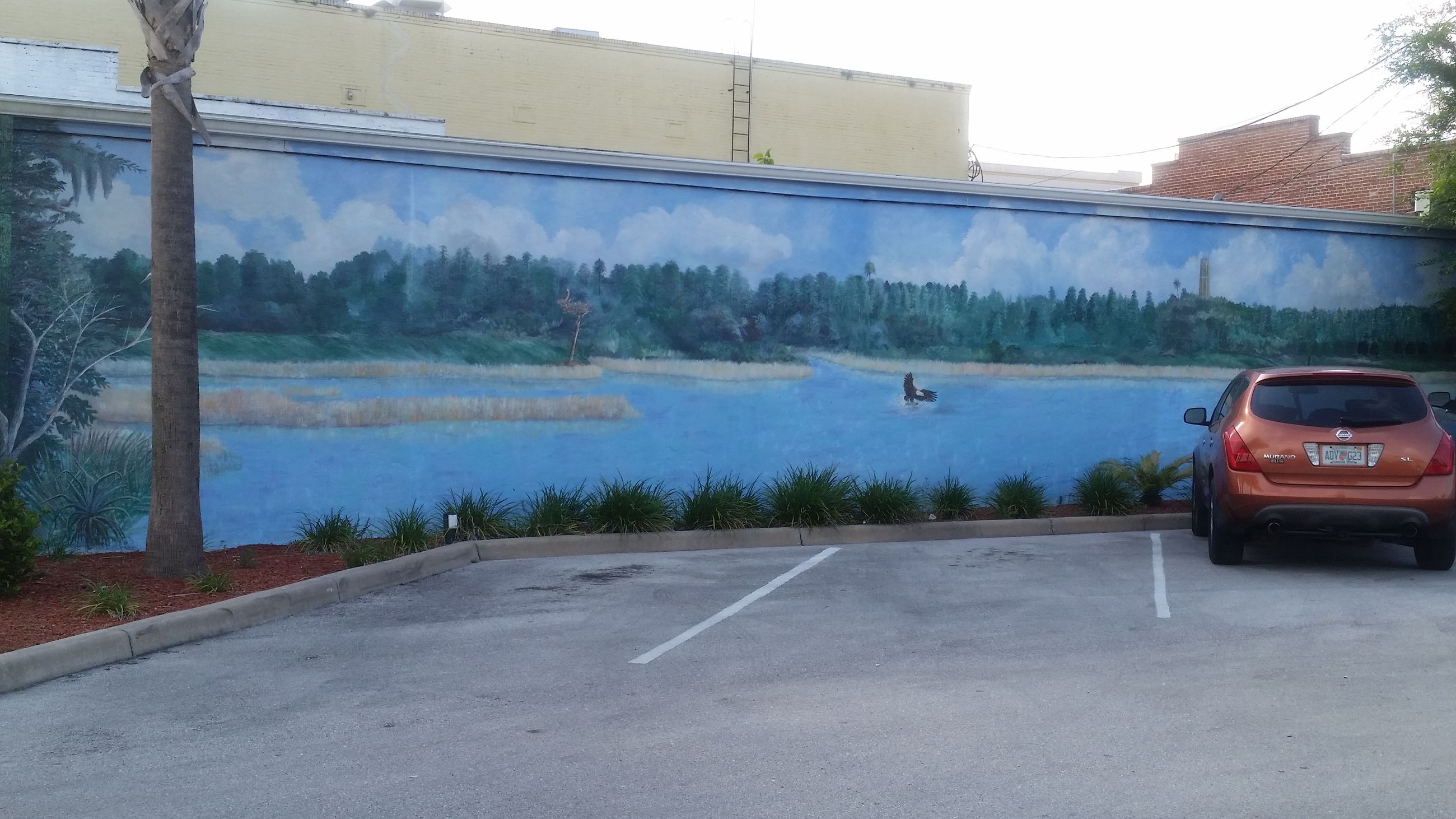 This special tribute was funded and painted by the students of Tom Freeman. The mural was kept as a surprise until it was completed in the summer of 2007. Motivated by love and great respect for Tom, his friends and students traveled to Lake Wales from all over Central Florida to participate in the mural project. The lead artist was Gerri Sage who designed the mural, oversaw the work and did a great deal of painting.

F.S. McLaughlin was supervising principal of Lake Wales Schools for nearly 4 decades. The founding of the current Lake Wales Charter Schools has its root in the desire to return to a school system the community knew during the tenure of McLaughlin. Mrs. McLaughlin was an integral part of the successful school system. Funded primarily by Frank McLaughlin Jr. this mural was dedicated in 2006 with many former teachers and family members in attendance. 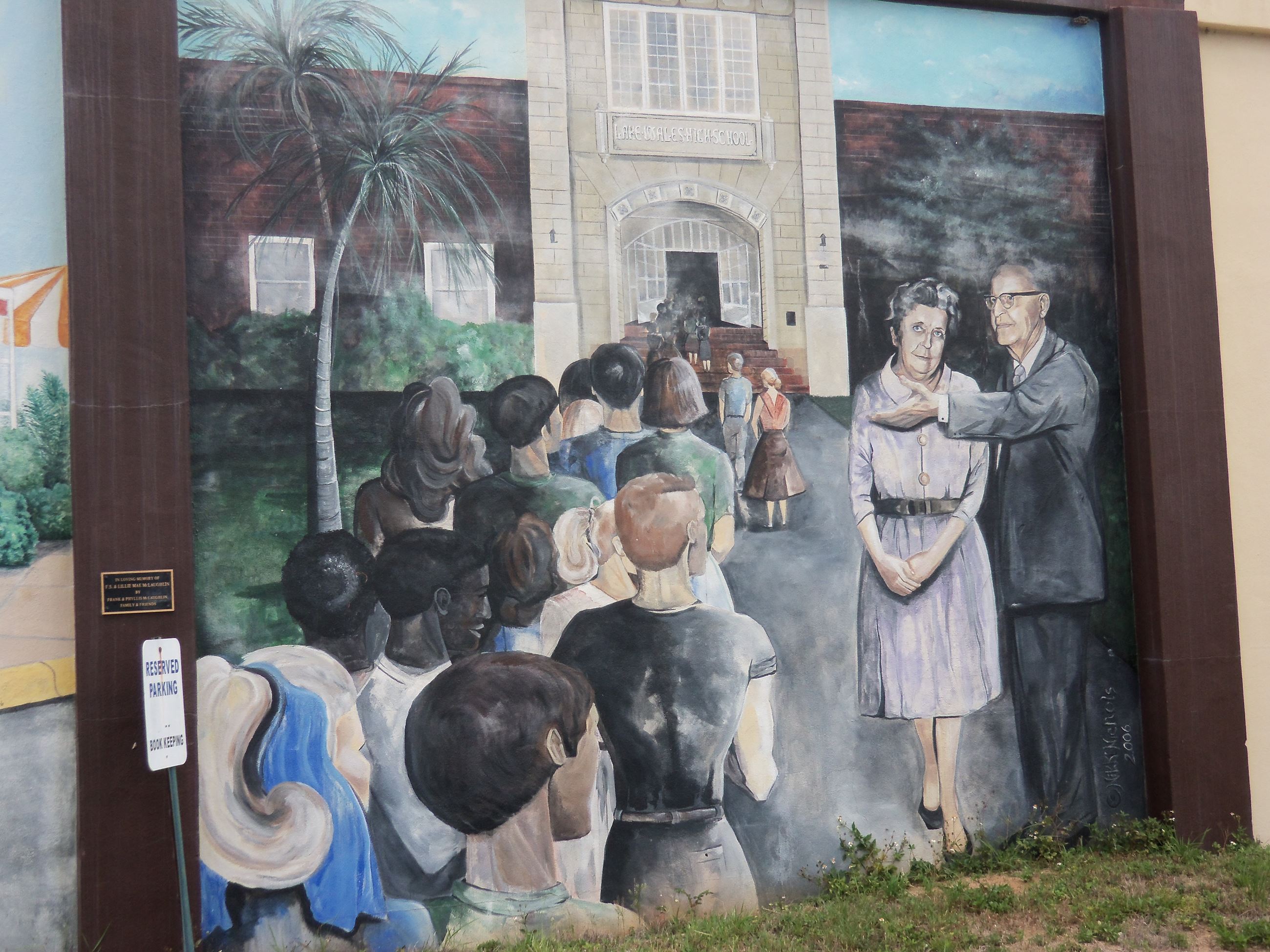 The Barrel was a centerpiece of downtown activity for nearly half a century. It served as a distinctive point of reference for directing visitors to downtown. The definitive word on local happenings could always be found a The Barrel as locals gathered for lunch and breakfast.

The last owner, Bert Frizzel, was noted for donuts, homespun humor, and involvement in the community. Funded by friends with fond memories of The Barrel, the mural was painted by Diane Lescard. It was fitting that during the dedication in the summer of 2006, a large crowd enjoyed root beer and donuts. 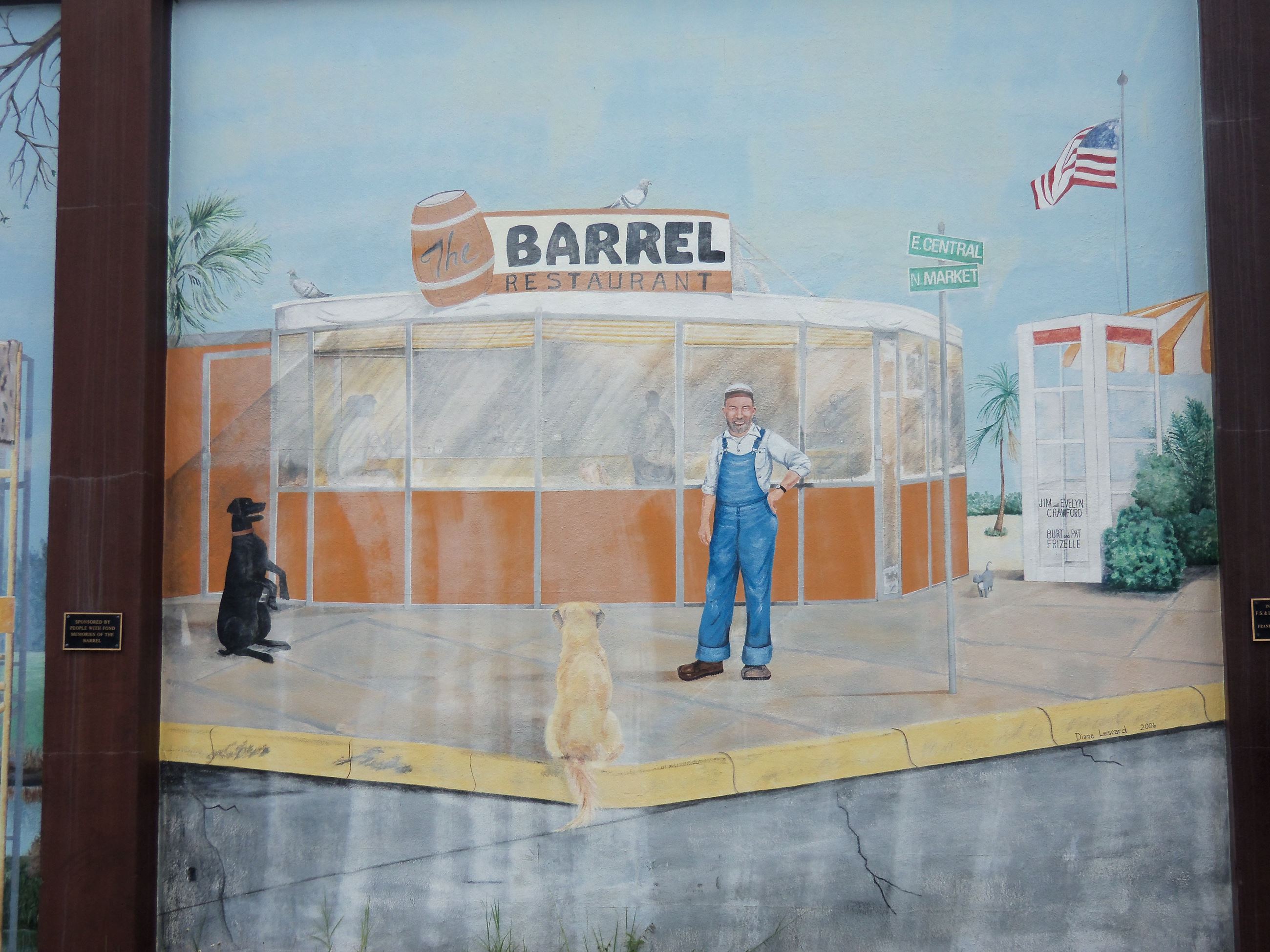 Jesse was a fixture on downtown streets for six decades. People from all areas of the community had respect for him. Nikki Nichols painted the mural in the spring of 2006 using an original oil painting by Tom Freeman as her guide. Her ability to capture the essence of Jesse's presence has brought wide acclaim. Funding for this mural came from friends and family of Jesse Williams, proud of this lasting tribute to a very important Lake Wales citizen. 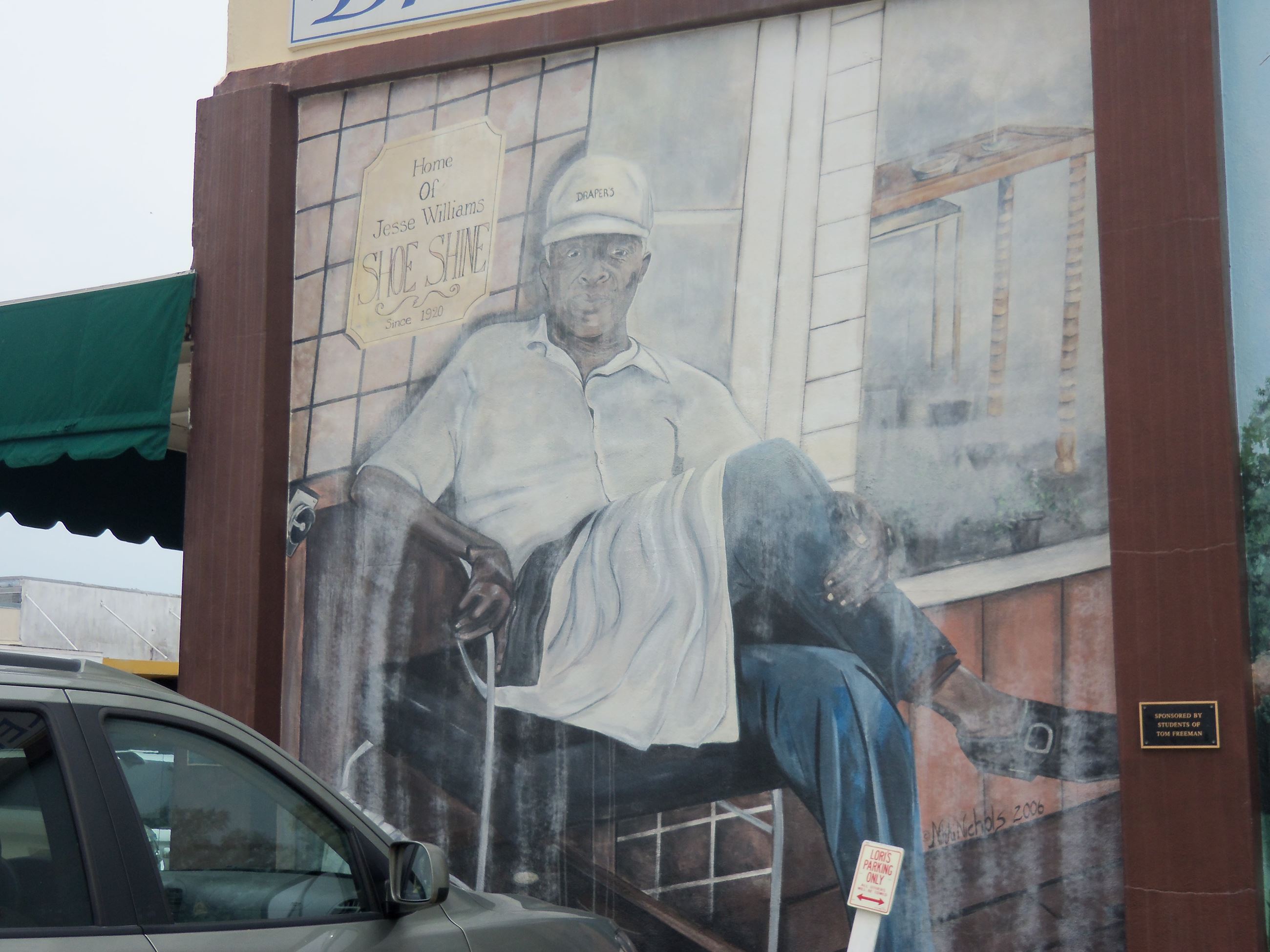 The Lake Wales High School Band and Scottish Unit have always been a source of pride to the entire area. The tragic deaths of Amber Jones and Alena Violette in 2005 brought their friends together to sponsor a lasting memory of these young ladies and to recognize the band. Friends of Amber and Alena raised the funds to cover the cost of the mural and a perpetual scholarship in their names. The mural was dedicated in April of 2006 with a band concert and spaghetti supper with thousands of supporters in attendance. 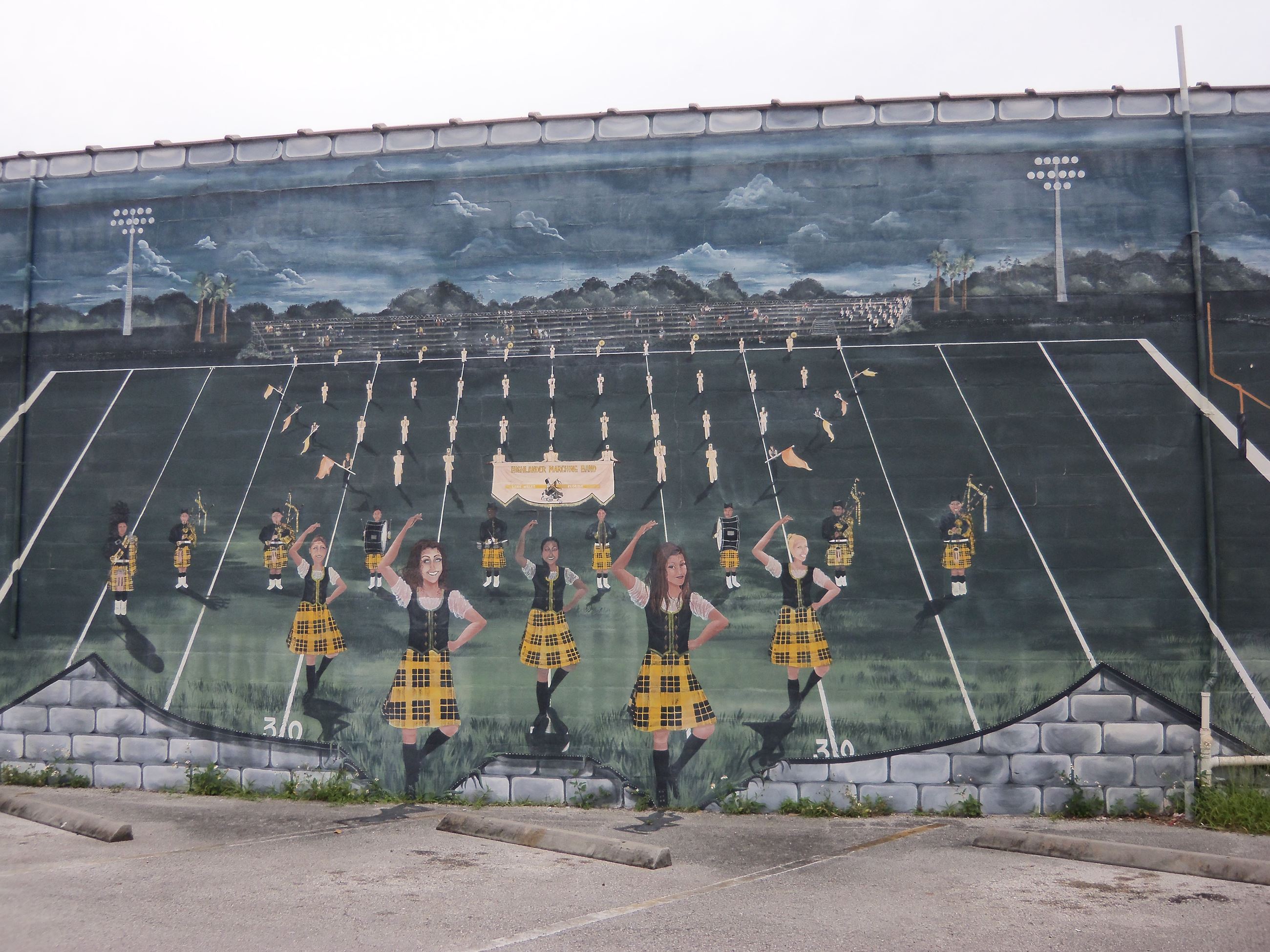 This mural undertaken by Tom Freeman in the summer of 2005, was Tom's last outdoor mural and an outdoor masterpiece. Health problems delayed the completion until 2006 when Tom's health improved. Local artists under his supervision were able to see the completion and dedication of the mural in December 2006. This gorgeous panorama of color, flowers and Florida animals is best viewed from the Post Office, just across the street. The mural was fully funded by True Value Hardware. 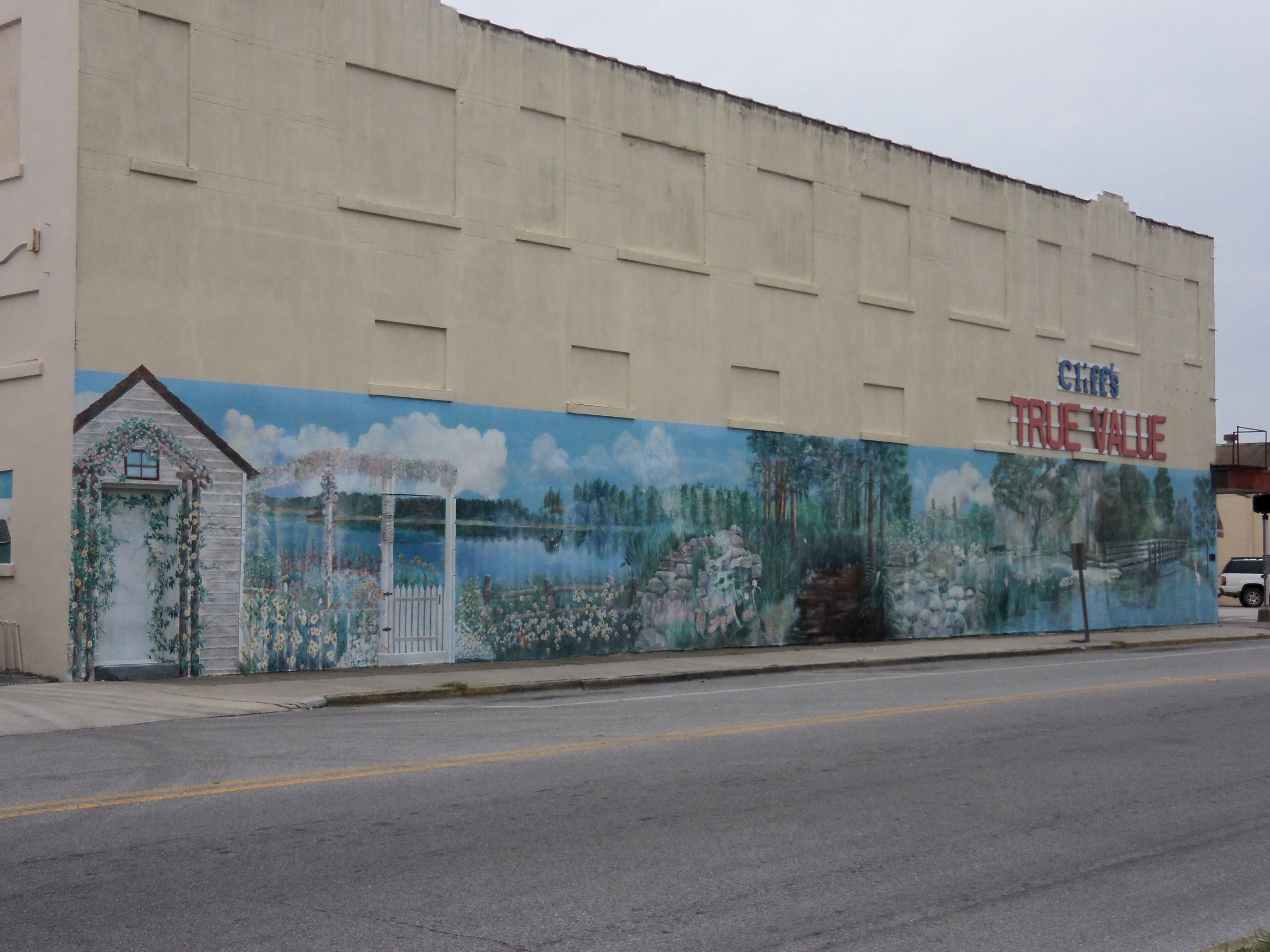 Standing in line at the Post Office windows, one can look up to see the mural that corners one end of the post office lobby. The mural represents the citrus industry that had become a vital part of our area economy by 1942. "Often mistaken for WPA art, post office murals were actually executed by artists working for the Section of Fine Arts. Commonly known as "The Section" it was established in 1934 and administered by the Procurement Division of the Treasury Department. Headed by Edward Bruce, a former lawyer, businessman and artist, The section's main function was to select art of high quality to decorate public buildings if funding was available. "By providing decoration in public buildings, the art was made accessible to all people". From "Articles from EnRoute: Off the Wall: New Post Office Murals" by Patricia Raynor.

The luster of the mural has dimmed since its creation over seven decades ago, but it remains a delight to Post Office visitors.

Waving American flags are visible for blocks as motorists travel Orange Avenue and First Street. This patriotic display reminds us of our love for our country and renews our undying spirit of patriotism.

This magnificent work was done by Lisa Moore and was both a labor of love and an artistic endeavor. The mural was fully funded by the United States Post Office and is a reflection of their pride in our country and our community. 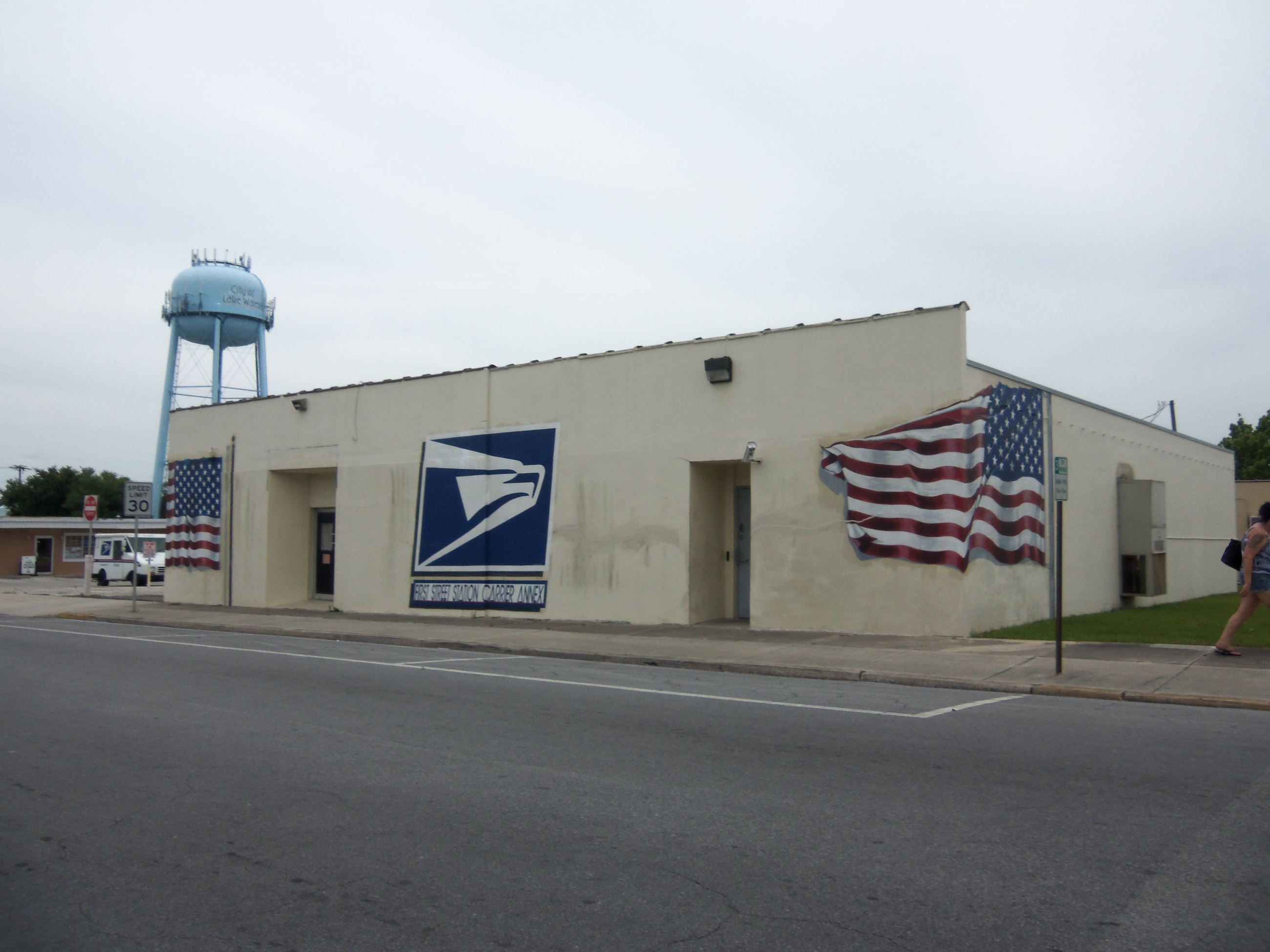 The Mural and Enhancement Board added great works in 2006 to a well-traveled but often overlooked street. Lamson's Lock and Key sports a whimsical mural that depicts a 1958 Thunderbird crashing in one side and coming out the other. Artist Lisa Moore was responsible for producing a realistic painting and bringing the concept to life. 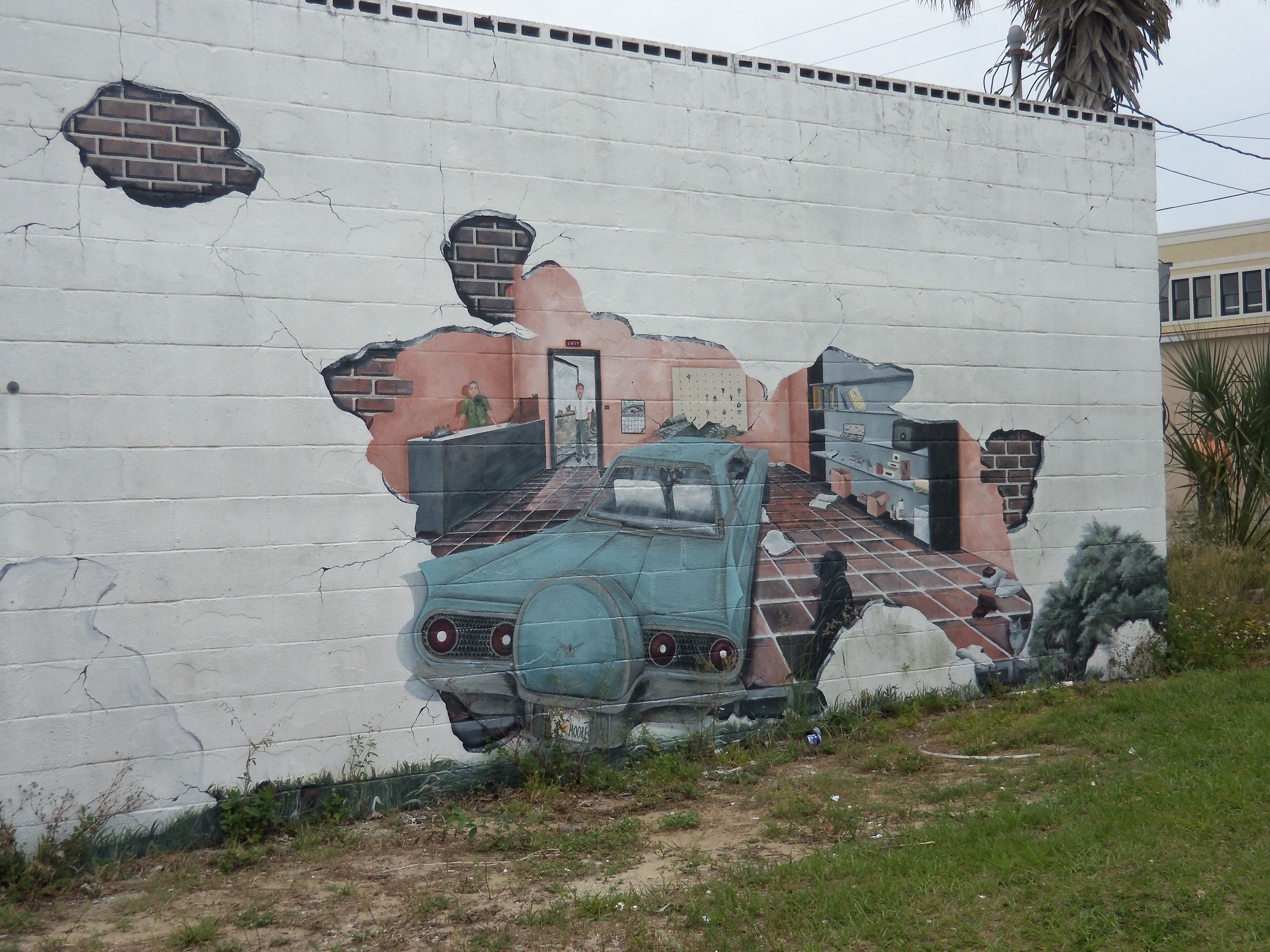 Amateurs with little painting experience tackled the E.R.A.D. building and created an appealing display of vines and flowers that has drawn appreciative comments from customers and others downtown. The taste of artistic accomplishment led the painters to work on other murals and take advantage of tips and pointers from professional artists. 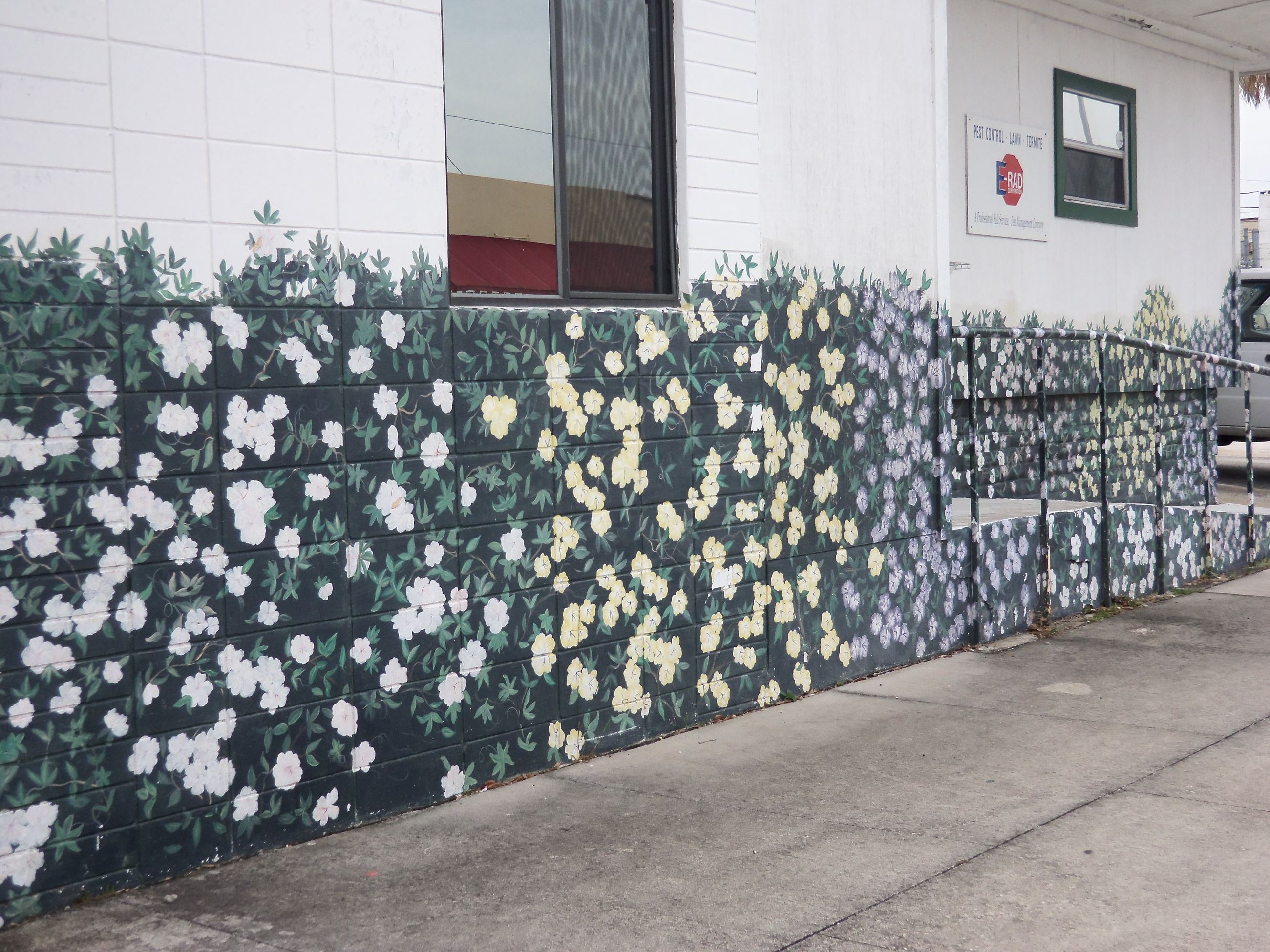 The reception area of our Lake Wales Public Library is dominated by a huge Tom Freeman mural depicting many animals native to this area and portrayed in their natural environment. From left to right the mural includes the Withlacoochee River, Bok Tower Gardens, the Lake Wales Ridge and the Peace River.

This mural was painted in three sections, transported to the library and mounted on the wall. In viewing the mural, one must appreciate the logistics of the endeavor and the result that makes it appear as one huge mural painted in place.

The mural was dedicated to the memory of R.T. “Tom” Nelson.  Mr. Nelson was active in the LW Library Association and served for many years as the LW City Library Board Chairman

This Tom Freeman work has provided the backdrop to many events at the library. The most notable was the appearance of First Lady Barbara Bush in conjunction with a Lake Wales Literacy Council Event. 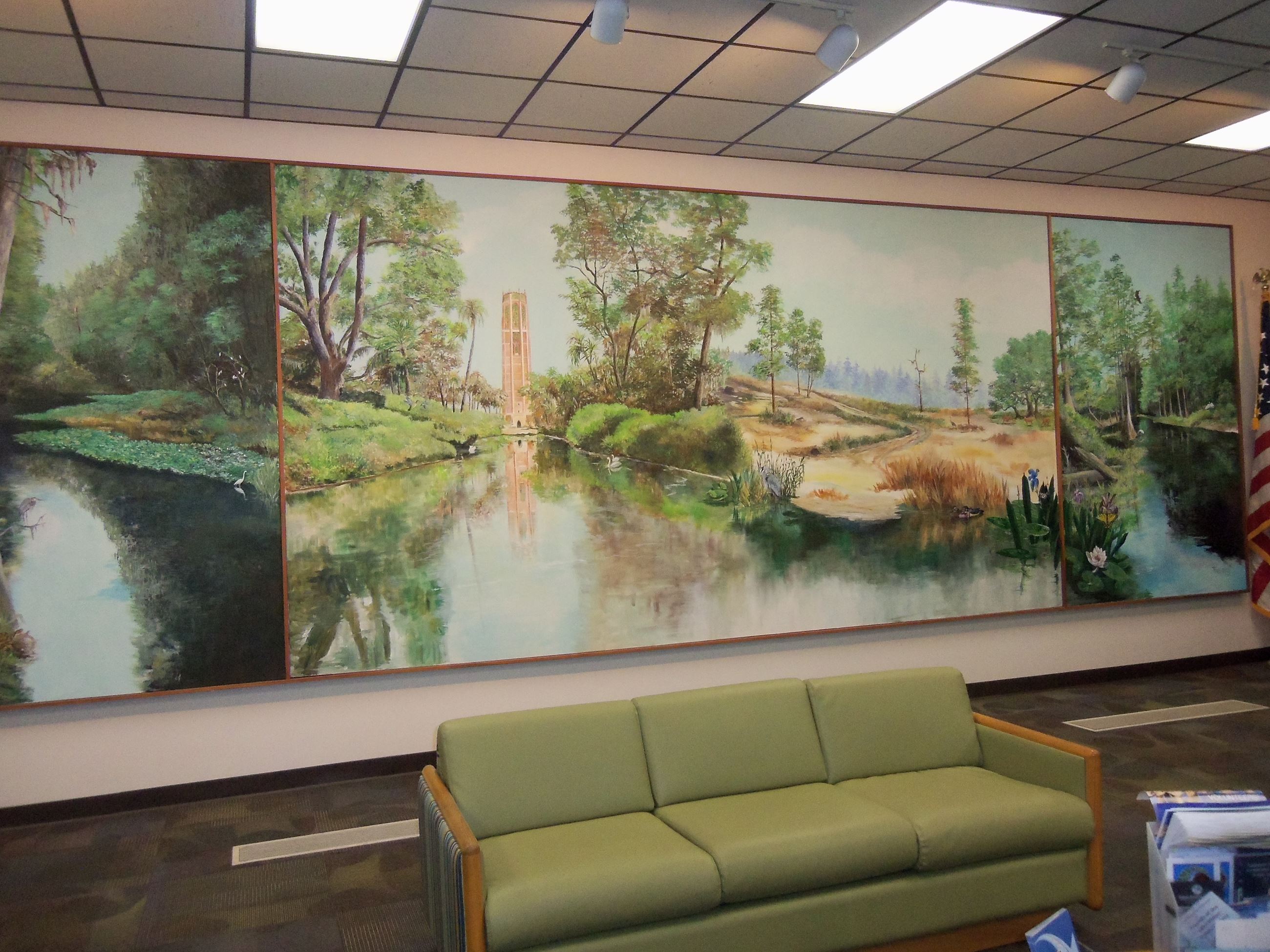